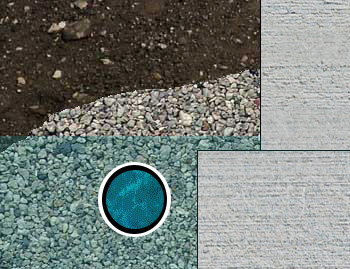 Cutaway of a French drain system installed on the outside of the concrete footing of a home foundation. A discharge line would also be included to send the water away from your home.

Shown in this photo are the French drain itself (filled with water), a fill of stone, and the backfilled soil.

One way of basement waterproofing that many contractors will suggest for waterproofing a basement is to install a french drain system along the outside perimeter of your home.

To install an exterior French drain, the contractor will take the following steps:

At Best Home & Property Services, we do not recommend this type of drainage system installed in your home.

Instead, we suggest installing an interior basement drain along the inside perimeter of your basement or crawl space. For a free waterproofing quote in the North Carolina & South Carolina area, call or e-mail us today! 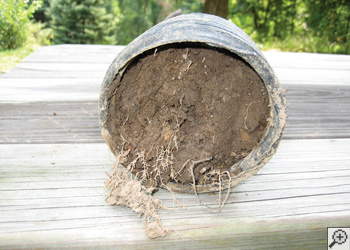 A clogged French drain systems found installed around a home in Charleston, SC.

French drain systems have been installed on the outside of homes since the 1920s, and if they were the best way to dry a basement, Best Home & Property Services would be installing them, too.

Unfortunately, placing a French drain or exterior footing drain along the outside is a recipe for failure. When you put a drainage system several feet under the earth, even in a bed of gravel, it will eventually clog with dirt, roots, and debris.

Sometimes, a contractor will try to stop this by laying down a layer of filter fabric around the drain. In this case, instead of the drain clogging, the filter fabric does and won't let water into the pipe. Other problems such as freezing pipes and improperly sloped lines are also common. This type of exterior drainage commonly will not handle water that collects under your basement floor, in which case you'll still need a sump pump inside your basement. Some contractors even connect the exterior drains to the sump pump inside. Now that's sure to clog!

What happens when your drainage system clogs? It will need to be excavated and you'll have to start over. Who wants to do that again?

For a FREE waterproofing quote, call or e-mail us today!

Looking for a price? Get a no cost, no obligation free estimate.

We serve the following areas 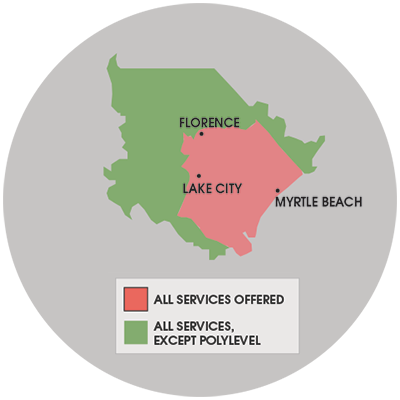